I found a headless mannequin at Goodwill because fate was smiling on me that day. I've been wanting a mannequin for years now because reasons. We have a mannequin store here in town, but they're a bit pricey. So you can imagine how happy I was to find one for $14.99. My husband was shopping with me and immediately helped me carry it to the register when I said "I need this." There was a second mannequin at the register, waiting to be picked up by another customer. I momentarily felt bad for breaking up the twins, but realized it was better this way as I did not know if I had the space for two mannequins. Better they each get a loving home with plenty of room rather than have to fight for affection.

Thanks to the help of some friends, I named her Derriere de Milo. She's spent the last few weeks nude behind the sofa, just for lack of getting to do stuff due to the Polaroid Fiasco. However, it's time she earn her keep. As my husband has been gone the past week at some sort of librarian seminar, I decided he needed a proper welcome home. So I got Derriere gussied up in some fancy attire, gave her a new head and accessories, and placed her in his shower, behind the curtain.

I originally wanted her to be holding an axe. Turns out she has two right arms and holding anything is a problem. I wonder if her twin has two left arms.

The plan was a success. My poor husband screamed in fright as he flung back the shower curtain. Upon collecting himself, he said "Congratulations, you finally got me." 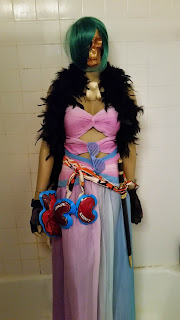 This is the second worst post you'll ever read

You know what I did for my thesis? Wanna know?

Because I still have nightmares about it.

Everyone with kids will have nightmares about it.

The poor bastard writing the article about my thesis will probably have nightmares too.

I'm afraid he might hate me after all that.

You know what makes the whole thing worse?

My adviser fucked the whole class over and didn't seek IRB approval or have us CITI certified.

My thesis can never be used for any professional anything ever.

All that work and horror and it was all for nothing.

Please enjoy this cat gif as a palate cleanser:

Like discovering where I put my left sock, or reading this whiny post, only not as irritating.

I pretty much abandoned this blog the past couple years. When I'm writing for myself, I will stick with it until the heat death of the universe. When I think I might have any sort of audience, I start making un-expressed promises of content delivery, then instantly procrastinate because it's become A Chore and if there's one thing I have mastered, it's procrastination of anything resembling work. So writing and posting content for others became a chore and I was tired of all the work.

For one thing, it takes time to reformat Blogger's weird HTML to not put gigantic white space in all the wrong areas when I insert pictures with captions. On a blog where the content is mostly pictures with captions, that takes too much damn time. Time I could be using to find other things to procrastinate. So I found Tumblr and started a Tumblr blog. It was pretty sweet. I just posted a bunch of pictures with caption as individual posts until my queue filled and then screwed around the rest of the week.

But finding things to take that many pictures of takes time. I'd spend one day a week driving all over the county, looking in thrift shops, flea markets, and antique stores for beautiful and terrible things, then the whole evening downloading the photos, editing them, uploading them, and finally captioning them. As much fun as I had initially, spending that kind of time on something I just did now and then while I was on some other errand or project became draining. I had a ton of content the first four months, but that's because I had taken those photos over years and across multiple states and never posted them. It was easy because most of the work was already done.

Once I ran out of backlog, I spent more and more time trying to find the same level of fuckery in a relatively small geographic area. It wasn't so bad at first because a lot of places were new to me. When I started seeing the same things over and over in thrift stores, I realized I needed to rotate my locations so I'd see new stuff, even if it meant less content. After a while, even that failed to help. I became quite jaded. Things I would have once taken a picture of were ignored because honestly, how the hell can any Precious Moments figurine stand up to Shelly the Clown? It can't, is the answer. Nothing can.

If this was my job or a serious part of my life, I wouldn't complain about the work. Posting fuckery is just something I like to do now and then. I take a picture of a metal goat while picking up milk at the grocery store or go visit some ramshackle antique store in the middle of nowhere while on my way home. Once I went back to school, spending a whole day on fuckery became a problem. The program I was in ran on an accelerated schedule so two months equaled a full semester of regular college. It was ridiculously fast-paced and I got a couple days off every two months if I was lucky. I just didn't have time. On top of that, last year was the home stretch to graduation and I was volunteering at the local women's shelter. Plus I was doing a lot of pro-bono work since I didn't have an actual job. I had to bend space and time just to keep up with actual responsibilities.

Also, Minecraft. But that relates with the pro-bono stuff, so whatever.

So basically, I couldn't keep up the invisible demand of my Tumblr blog and I got burned out on fuckery. Also, spending so much time on Tumblr resulted in me hating all my favorite TV shows, much like that intro to Greek and Roman literature ruined my love of mythology for years. Jesus, just reading Tumblr is exhausting.

So I dunno what I'm going to do with this now. I like writing. I write a lot just for shits and giggles. I have been told many times I should write a book, but I'm sure someone told Stephenie Meyer the same thing. I tried writing a book once, but it got to be a Chore before I even started.

I'm not going to make promises about posting in this blog on a regular basis or anything else. I don't even know if I'm going to bother to keep the damn thing. But if posts show up here now and then, it's just because I felt like writing and apparently am not allowed to write about Derriere de Milo, my headless mannequin, as my final paper even though it totally belongs as a psychology class discussion topic.
Posted by KMB at 4:51 AM No comments: